Can the international economic and legal system survive today’s fractured geopolitics? Democracies are facing a drawn-out contest with authoritarian states that is entangling much of public policy with global security issues. In Global Discord, Paul Tucker lays out principles for a sustainable system of international cooperation, showing how democracies can deal with China and other illiberal states without sacrificing their deepest political values. Drawing on three decades as a central banker and regulator, Tucker applies these principles to the international monetary order, including the role of the U.S. dollar, trade and investment regimes, and the financial system.

Combining history, economics, and political and legal philosophy, Tucker offers a new account of international relations. Rejecting intellectual traditions that go back to Hobbes, Kant, and Grotius, and deploying instead ideas from David Hume, Bernard Williams, and modern mechanism-design economists, Tucker describes a new kind of political realism that emphasizes power and interests without sidelining morality. Incentives must be aligned with values if institutions are to endure. The connecting tissue for a system of international cooperation, he writes, should be legitimacy, creating a world of concentric circles in which we cooperate more with those with whom we share the most and whom we fear the least.

The book, Global Discord: Values and Power in a Fractured World Order, published by Princeton University Press, may be found here. 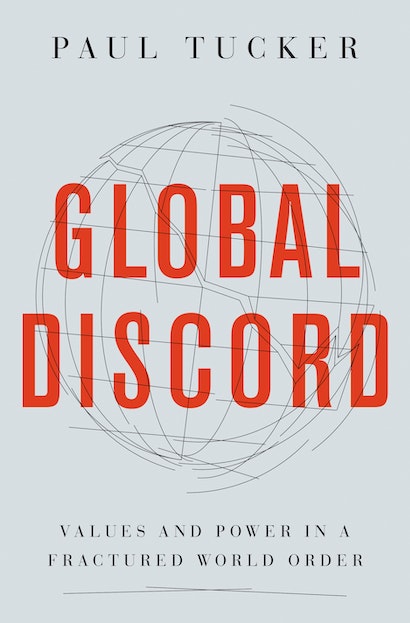 Sir Paul Tucker is a research fellow at the Mossavar-Rahmani Center for Business and Government at the Harvard Kennedy School, and author of Global Discord (Princeton University Press, 2022) and Unelected Power (PUP, 2018). For over thirty years until late-2013, he was a central banker at the Bank of England and Basel.